Jump to content
In the Name of God بسم الله 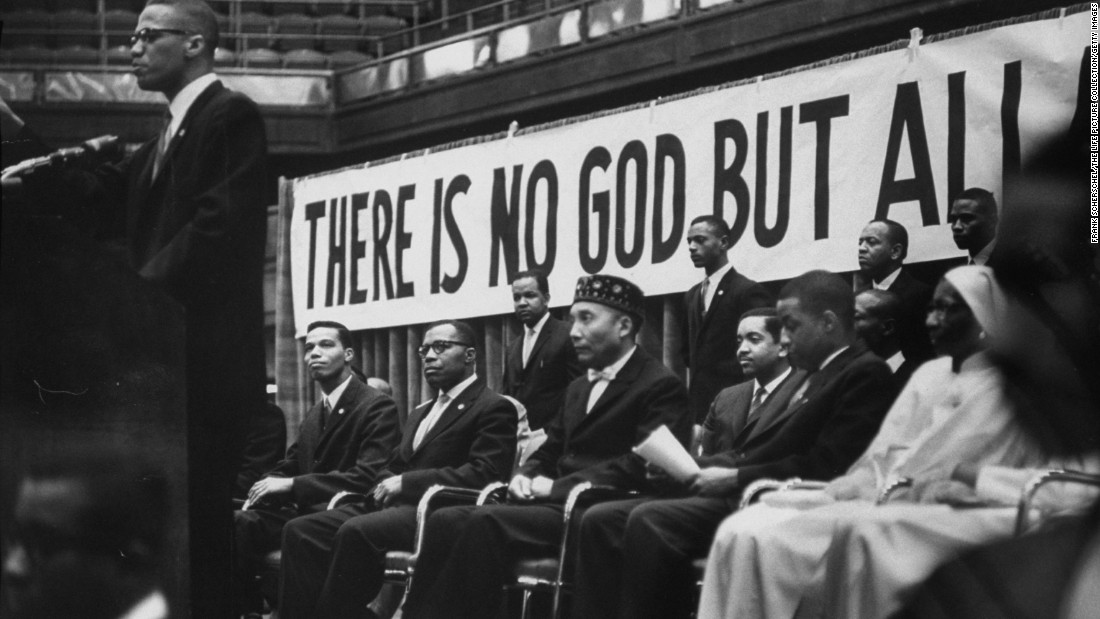 When Elijah Muhammad went to court and the judge asked him about his aim and purpose, he said he was going to make Black America Islamic. The judge said that making black people Muslims was like putting pants on an elephant. Elijah Muhammad said, "I got one pant-leg on already."[1]

In 2012, my student society invited the late grandson of Malcolm X, Malcolm El Shabazz, to speak at our university. I had some knowledge of his grandfather’s history, having watched Spike Lee’s legendary 1992 biopic, but I did not have a thorough understanding of the history of Islam in America. His appearance at the University of Toronto drew in a large audience.

We spoke briefly before his speech about the cold Toronto weather and his seminary studies in Syria, and I bought him two coffees – a double-double and an iced cappuccino. It was probably too cold for the iced cap, but it was a signature Canadian beverage at Tim Hortons that we felt he may enjoy. After the speech, Malcolm expressed his gratitude for the warm welcome, and even called me “a sincere brother”.[1]

Although Malcolm El Shabazz had the tenacity of his grandfather, he was a troubled young man. After a life of run-ins with the police, Malcolm was killed in 2013 at a night club in Mexico under peculiar circumstances.[2] At the time I had just finished reading The End of American Lynching by Ashraf Rushdy, which details the history of racial oppression in America. The loss of this new friend prompted me to devote some time to studying the Civil Rights Movement – a story of persecution, loss, and eventual healing and rejuvenation.

I was skipping university readings to flip through books, papers, and videos that pertained to contemporary black history. I found the topic to not only be socially relevant, but spiritually uplifting and inspiring. The story of suffering ex-slaves fighting fearlessly for their inalienable rights spoke to me. The Nation of Islam taught that the black man was robbed of his name, language, culture, country, God, and religion. Their spirit and valour could only remind me of the Israelite bondage in Egypt, or the Arabian Age of Ignorance. Nations are born out of trial and tribulation. Eventually, people pull together in tough times for a greater good, and they can find success even when all they have on their side is a kernel of truth.

There are some obvious and irreconcilable differences between traditional Islamic theology and the teachings of the Nation of Islam. Sunni and Shia Muslims feel queasy at the suggestion that God’s attributes were manifest in Master Fard Muhammad, that all whites are devils, and that Elijah Muhammad was the messenger of God. These issues aside, there is much to learn from the Nation of Islam’s example. They were arguably the most successful and the most socially-relevant Western Islamic movement in history.

By the 1970s, the Nation of Islam had nearly two million members, almost all of whom were converts from a Christian background. The fact that many victims of the Trans-Atlantic Slave trade were Muslim[3] perpetuated the idea that Islam was the proper religion of the African American. Malcolm X was able to present the Nation of Islam’s enigmatic teachings to the public in a way that highlighted the need for separation, independence, and sovereignty for black people. Within a few short years, Malcolm X’s wit, charm, and hard work brought hundreds of thousands of people to the organization. The organization was still growing exponentially even after the controversy surrounding Malcolm’s assassination.

In 1974, the Nation of Islam owned enough assets to create a budding, self-sufficient community: over one hundred and fifty mosques, over forty schools, a newspaper plant, farms, a bank, apartment complexes, restaurants, grocery stores, clothing stores, a national trucking system, and an aviation department.[4] Whether or not territorial independence was viable, the Nation of Islam created an independent subculture and economic unit. This frightened the U.S government. The FBI under J. Edgar Hoover actively tried to sabotage the movement and “prevent the rise of a ‘messiah’ who could unify and electrify the militant black nationalist movement.”[5] In 1996, then-Libyan leader Muammar Qadhafi offered to give the group one billion dollars, until the donation was blocked by the Clinton administration.[6] Still, the unmatched coordination of the Nation of Islam attracted the brief support of the D.C. Department of Public and Assisted Housing.[7]

The group’s unique diet was one of the primary means by which Master Fard Muhammad and the Nation of Islam were able to hook-in African American converts. The diet not only cut down food expenditures during the Great Depression, but it purported to have improved the general health of adherents.[8]

Master Fard Muhammad and Elijah Muhammad developed a strict diet that makes a traditional Muslim diet look easy. Not only did the Nation of Islam fast and abstain from pork and alcohol, but they only ate one meal per day. This was done to prepare adherents for the possible severity that national independence or apocalypse may cause.[9] To improve their general health, Black Muslims mostly ate vegetables, fish, whole-wheat bread, and chicken; and they would avoid all non-halal and non-kosher meats.[10] Even beef and potatoes were to be avoided for being too coarse and too starchy respectively.[11]

Every member of the Nation of Islam is put into one of two institutions: males became part of the Fruit of Islam (FOI), and females became part of the Muslim Girls’ Training (MGT) program. The FOI is a paramilitary force with its own hierarchy that is trained to protect and provide provision for the Nation of Islam. They wear distinct blue uniforms and provide security for social and religious functions. The MGT educates women on home economics, housekeeping duties and self-defence.

There is a strong sense of responsibility in the sect that reportedly commands respect and better job opportunities for black people.[12] Indeed, devotees to the movement were encouraged to be clean, well-spoken, obedient, fearless, and abstinent from intoxicants and other vices – all traits that employers would give preference to, especially during tough economic times.

The emphasis on self-knowledge and self-emancipation, which was probably borrowed from Marcus Garvey, gave an urgent sense that black people should not wait for America to do for them what they can do for themselves. They would commonly ask, why rely on your ex-slave masters when you could pool in your own resources to build a future for your people?

The Nation of Islam was undoubtedly a realist organization that did not buy into Martin Luther King’s “dream” of an integrated America. After all, they believed that Caucasians were flesh-and-blood devils that Allah would soon destroy, and so whites were to be seen as rivalling competitors rather than potential allies.

Furthermore, unlike Black Lives Matter, the Nation of Islam puts a special emphasis on uplifting African American males from drug and alcohol abuse, gang violence, and hook-up culture. The perceived downfall of black men due to social ills was the primary motivation for the Million Man March.

What could traditional Muslims learn from this example?

The Nation of Islam proved that Muslims could be brazen and unapologetic; and not have to rely on co-opting forces in the political system to thrive in the West. Despite governmental censures on the organization and its leaders, the Nation of Islam produced Malcolm X, Muhammad Ali, Warith Deen Muhammad and Louis Farrakhan, who collectively introduced millions of people to the Quran and the Prophet Muhammad. The subculture the sect created heavily influenced the worlds of sports, music, and intermittent dieting in America.

The Nation of Islam sought to give a religious hue to the issue of civil rights. As people of faith, we don’t see all suffering as simply a result of natural or systemic causes. Rather, some suffering has a divine function that includes trial, refinement, and chastisement. The Million Man March’s major themes included “Affirmation and Responsibility” and “Atonement and Reconciliation”, which emphasized that a return to traditional values and religious duties would bring about Allah’s succor and uplift legitimate grievances. Malcolm X’s example in particular shows that daʿwa cannot exist in a vacuum; but rather it has to be complimented with a socially-relevant message.

The reformative power of our religion is something that many traditional Muslims are forgetting. The Nation of Islam targeted addicts, sex-workers, inmates, and broken families, and turned them into productive and upright citizens. They knew that their teachings, which are heavily influenced by the Quran, could “resurrect” their people. On the other hand, immigrant communities often neglect and ostracize Muslim individuals for their marital status, education, poverty and past crimes or sins. One must remember that the Prophet Muhammad never walked away from his people, despite the debauchery that they took part in jahiliyya.

Muslims in North America and Europe should not only be passport-carrying doctors and engineers, but a self-sufficient international community with its own sense of purpose, loyal only to our own values and worldview. The Umma is the true shining city on the hill, and that light could foist the second pant-leg on.

[1] “The Final Call.” Willie Lynch Letter: The Making of a Slave, www.finalcall.com/artman/publish/Minister_Louis_Farrakhan_9/Death_Stands_at_the_Door_-Pt_II_973.shtml. http://www.finalcall.com/artman/publish/Minister_Louis_Farrakhan_9/Death_Stands_at_the_Door_-Pt_II_973.shtml